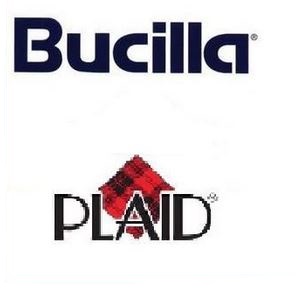 I generally try to keep things positive on my blog. It doesn’t do any good to be negative or mean. I, however, feel it is necessary to make sure my fellow stitchers are aware of companies that don’t take care of the customer and produce materials that are sub-par.

One such company is Bucilla, a subsidiary of Plaid. They just celebrated their 150 year anniversary, so they’ve been around a really long time. As a child, my mother would stitch their kits because they were a mark of quality. Dimensions and Bucilla were basically the gold standard of the stitching world and are two of the most common companies seen in needlework shops.

Having thought of Bucilla as a top-notch company, I purchased a kit from Hobby Lobby 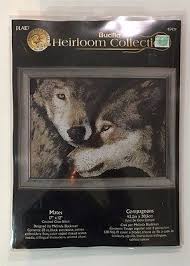 called “Mates” – a beautiful picture of two wolves – without hesitation. I spent my $45 and brought the kit home. Many kits used to bundle their flosses in two groups to make sorting easier. Thankfully many companies have moved away from this and now pre-sort their flosses. Bucilla still requires manual sorting, but I was used to that.

As I am sorting the colors, I noticed that I didn’t have two colors that I needed and I had extras of three others. Distraught, I enlisted the help of my mother, my father, my sister and my brother-in-law to make sure I truly didn’t have these colors. They all confirmed what I already knew: I was missing two colors and had extras of three other colors. I emailed the company and I was sent a color conversion chart for Bucilla to DMC floss colors. The two I was missing had no DMC equivalent.

I emailed again, and they ignored me. My mother was frustrated on my behalf and called the company herself. They spoke for about 20 minutes and insisted I did not know how to tell colors apart and that all the things I needed were in the kit. My mother told them that I had been a stitcher for several years now and she had been stitching since the 80’s. They again, insisted that neither one of us knew how to tell colors apart and that I can stitch the picture however I want. They would not replace the missing threads or even sell me the missing threads.

I was furious! I spent $45 on a design that I couldn’t stitch. I had thrown the receipt away, so returning it to Hobby Lobby wasn’t an option. I called Hobby Lobby anyway, and the general manager reluctantly agreed to take it back, but he wasn’t happy about it. I replaced it with a Dimensions kit instead, because I knew they were consistent in their quality and have good customer service. Every single company I had contacted when I was missing or running out of thread, has been super kind and helpful. Bucilla is the only exception to this.

If you see a design kitted by Bucilla, please try to look for the pattern elsewhere, as it probably is available. Bucilla / Plaid do not take care of the customer and even though they’ve been around since 1868, that doesn’t mean they are a reputable company today.